At the end of March we visited a state park about an hour's drive norhtwest of Las Vegas, the Valley of Fire. The name is a bit overdramatic, and this small park doesn't compare with some of the Utah parks, like Zion, or Arizona ones, like Monument Valley, etc. Nevertheless, it has interesting rock formations, mostly Aztec sandstone, with occasional limestone and conglomerates. It is a part of the Mojave desert. There were some early Indians here, the Anasazi [or Ancient Pueblo People], who have left petroglyphs in various places. They took advantage of the black "desert varnish". This a thin depposit on the rock of clay with iron oxide and manganese dissoved by rain. You can see it for instance in the Canyon de Chelley, Arizona. You can make out a few towards the bottom of this rock formation. 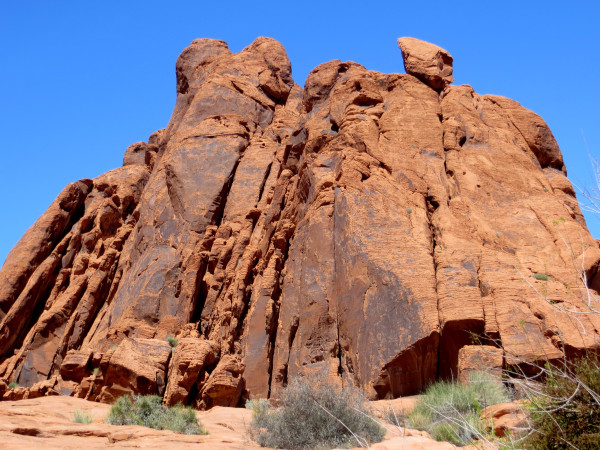 There are several easy trails in this park. The most interesting is the Fire Wave, about 1.5 mile return walk. Though the walk takes quite a while, as you have to go over very sandy areas where your feet sink, and slippery rock with ups and downs. There is no shade at all, so hats and water are recommended. You do see some interesting flowers along the way. 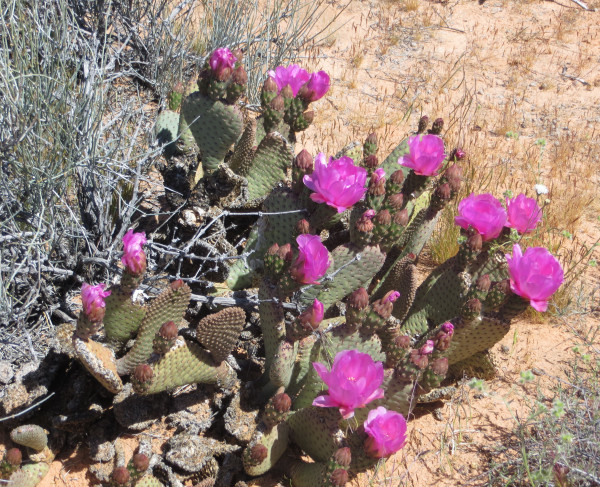 This an Opuntia, a very common cactus. 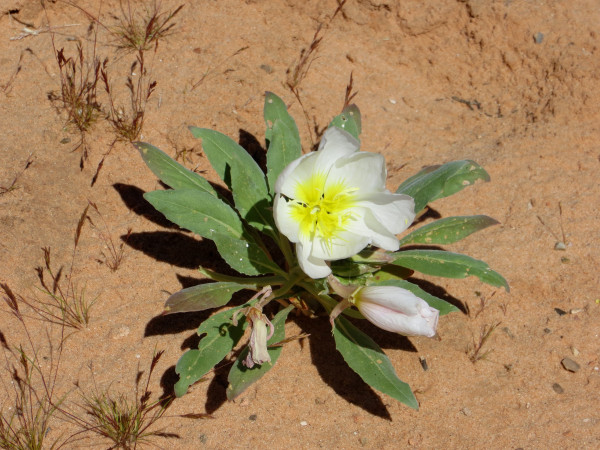 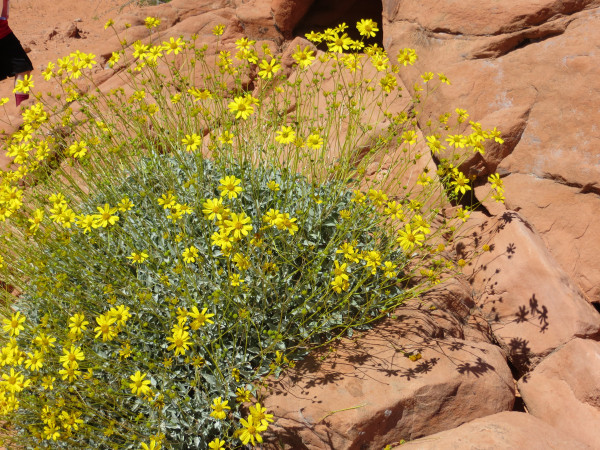 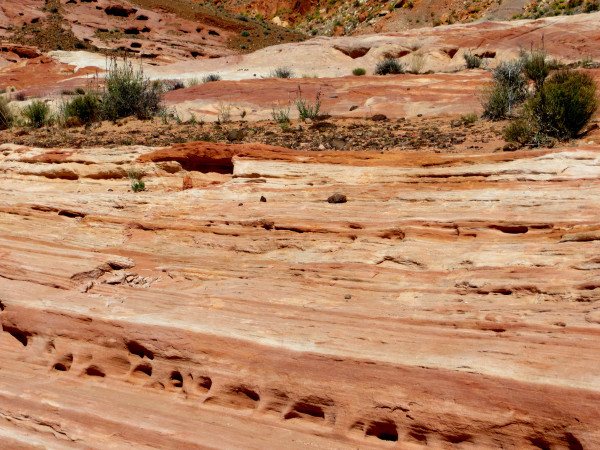 On the way, notice the row of little erosion holes, where wind and water have taken out softer rock. 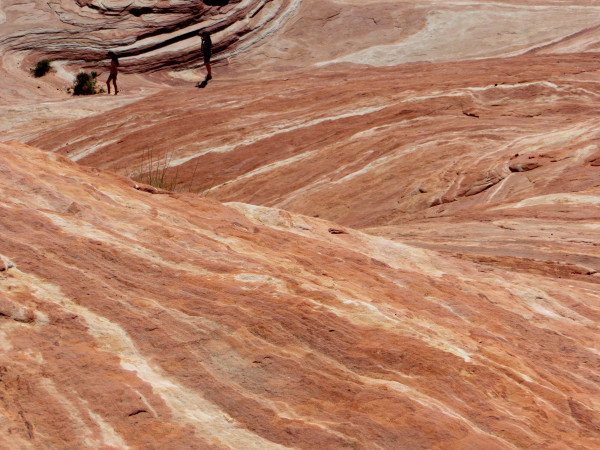 The rock is very striated. Sometimes you can imagine swirls of molten rock, millions of years ago. 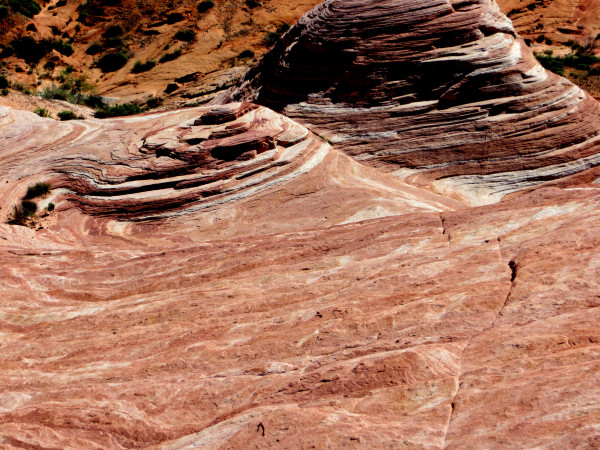 Here is an example . 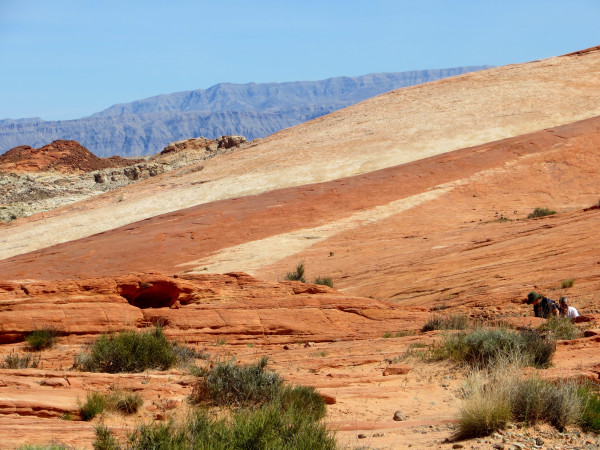 And then at times, there is a larger swath of color. 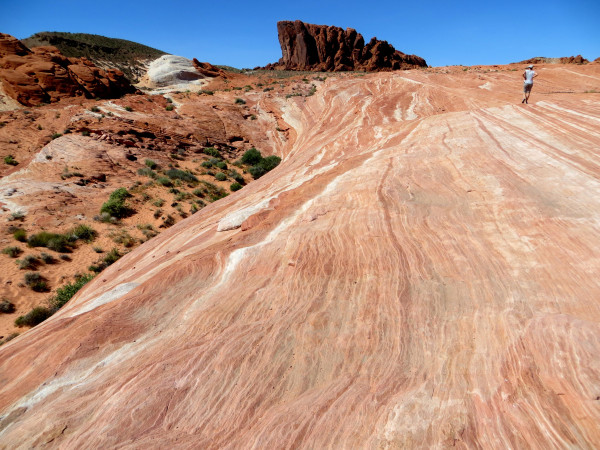 The trail goes on, but it's not too much further. Have no illusions, the guy at the upper right seems to be jogging, but he wasn't, he was just walking with a little more energy than we were. You cannot run on these surfaces. Finally, you arrive at: 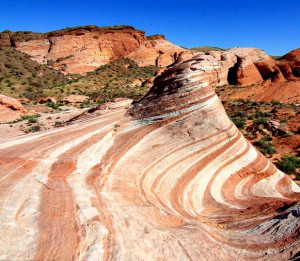 The Fire Wave. Sorry, I had to borrow someone else's picture, as mine didn't come out, so the format is different. Actually, it is a bit of a let down after all one has seen along the way.

Still, it was a worthwhile hike. Luckily, several parking areas have shaded tables where you can sit and have a pcinic. There are also some basic toilets.
Collapse